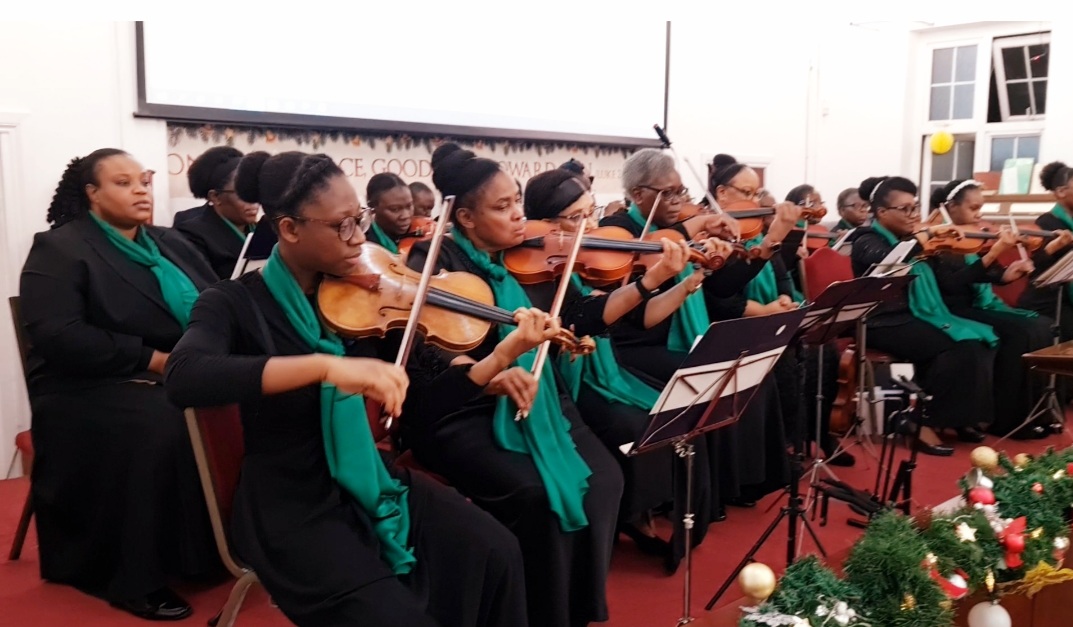 We thank God for another opportunity to have a Christmas concert in-person at our Peckham church. We had 108 people in attendance including our new District Superintendent, Reverend Mark Mfandarahwa, and his family and a good number of visitors, and the Christmas concert featured the Combined Choir and Orchestra in both London branches – Peckham and Bexley.

The Christmas concert started with a welcome address by Sister Olos Irenoa, who also led the opening Congregational Song – O Little Town of Bethlehem. Then two orchestral pieces were played in succession – “Pomp and Circumstance” followed by “Christmas Bonanza 1 – Deck the Hall” led by Brother Godwin Okusanya. A beautiful choir rendition sang of “Sing the News” and “Joy to the World Medley” was conducted by Sister Olos Irenoa. Then a string ensemble played a thrilling piece titled “Loka Kalipso”. Before the interval, the choir rendered “Amen, Tell it on the Mountain” conducted by Sister Emah Itang followed by a vocal solo titled “O Holy Night” sang by Sister Tope Ajibola.

During the interval, Brother Mike Owolabi led the audience while they sang a few Christmas carols including “Away in a Manger”, “O Come all ye Faithful” and “O Little Town of Bethlehem”. After the interval, the Orchestra played “Festival Prelude from Te Deum” followed by “Christmas Bonanza 2 – Hark the Herald Angel’s Sing” played by The Orchestra. A vocal duet titled “When You Believe When There’s a Miracle” was inspiring and uplifting to the audience. The choir then presented “Baby Born in Bethlehem” conducted by Sister Emah followed by a Trumpet and Piano duet by Brother Seun Sodipe and Sister Aanu Sodipe respectively. Before the sermonette, the choir sang “Do you Hear what I Hear”.

Bro. Godwin Okusanya gave a short exhortation titled “Do you Hear what I Hear”? He emphasized that the Christmas season is one of good news. This glad tiding of great joy is that Jesus Christ is Born.

Using John 3:16 as his text, he stated that if we have to believe that He can save us then we will be saved. He said, there are two places, humans will go to at the end of their lives, and encouraged everyone to choose Christ so we can go to Heaven. The last rendition for the concert was titled How Great Thou Art & Majesty Medley conducted by Sis. Emah.

During the announcement, Brother Ola Balogun recognised two guests that have regularly attended our concerts over many years – Councillor Michael Shittu – Old Kent Ward, Southwark Borough, and Ex-councillor Johnson Shittu – now the Special Adviser to the Mayor. Mr. Johnson Shittu gave the vote of thanks. He expressed appreciation to the choir and orchestra for an inspirational evening of Christmas music and thanked every family, the church community, and everyone who had contributed and reached out during the pandemic.

Brother Balogun reiterated how the church contributed to the wider local community through music and welfare activities. He encouraged people who are interested in learning the type of music played by the Orchestra to join Salem Music Academy for musical training based on their service to the community. The closing congregational song was “Oh Beautiful Star of Bethlehem” which was heartily sung after which the audience was encouraged to spend time in prayer reflecting on the message of Christmas through music.

Find pictures from the event here.